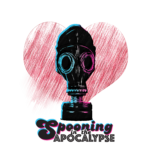 About Spooning In The Apocalypse

Spooning in the Apocalypse is a podcast set after the end of days and after the work day has ended. Tune your fictional dial, to the fictional radio network WSPN the Spoon, for the fictional call in style radio show Radiationships…it’s fictional. In each episode registered Professor Shaum Defroyen and his co-host, Radd Flink offer advice and solace to Apocalyptic relationships. Digging in and digging it up, whether the callers are learning to love themselves or someone else, Radiationships will tickle the right spot.

If the weight of your Apocalypse is too much, let them Apoca-pick you up.

Spooning in the Apocalypse is a passion project/another desperate creative attempt by established Nashville artist, Tavius Marshall. In the summer of 2016 the weird idea, and concept seedlings started sprouting in his brain while his real life was falling apart. Tavius and his wife Ashley Litchford-Marshall, are multi-racial artists who having already started the podcast The Mixer: Legal to Brew a show about multi-racial issues, Tavius wanted to take podcasting to even weirder places. Making a universe where not only does it all feel like the Apocalypse, but it, in actual fact, is; and we are just trying to work through it.  Pitching this to chosen persons close to him, Nathan Connor joined as “Radd Flink” and Head Writer/Co-Story Creator , Drew Collins joined as “Shaum Defroyen” and Head Sound Designer/Sound Producer/Music Composer/Audio Tsar, and Ashley Litchford-Marshall joined as the voice of “The Spoon”, Media Designer and Photographer.   A year of concept testing and pre-production later, the first episode of Spooning in the Apocalypse was born, the rest is the future.

Spooning in the Apocalypse is recorded and produced in Nashville, TN in the basement studio of our Audio Tzar, Andrew Collins. This podcast is entirely a passion project, that is produced, recorded, written, composed and performed entirely in house. We use classic writing  for our segments Evers After and all of the “in world” commercials. For Radiationships and the story, we use a mix of, pre-character development, story outlining, retro-scripting, editing and scripted improv. It is very important to us, that representation of sex, gender/non-gender, race, people without access, and religion exists in this podcast. We represent a very diverse group and we will always strive to do better . We have very strong rules about people not playing ,joking, or poking, at people they do not represent. While we all play imaginary creatures, people, or things that we are obviously not. We believe, it is vital that people for who, and what they are, are respected. Our cast and contributors, reflect and wide a varied part of the population of Nashville, (and some out of state/out of county) and we are always actively seeking, to open it up more.

The Spoon/additional voices by Ashley Marshall

Download / Subscribe:  The podcast can be listened to directly from the website.  Subscribed and listen to on most of your prefered podcast platforms,  such as Itunes, GooglePlay, Stitcher and Spotify.

Schedule:  12-14 episodes,  released the first quarter of ever year.  2 episodes are released every tuesday, 2 weeks apart, until the season is finished.

Other places to find our “in world” weirdness:

What people think of the show…

“If those are jokes, I don’t get it…” – Dave Jackson,  Podcast Rodeo

“If you can handle the depths this thing descends to, you will be completely thrilled. Not OK for kids!! But its delightful how much TLC went into this. Great acting, sound design and writing….” – hellofrancy,  Itunes